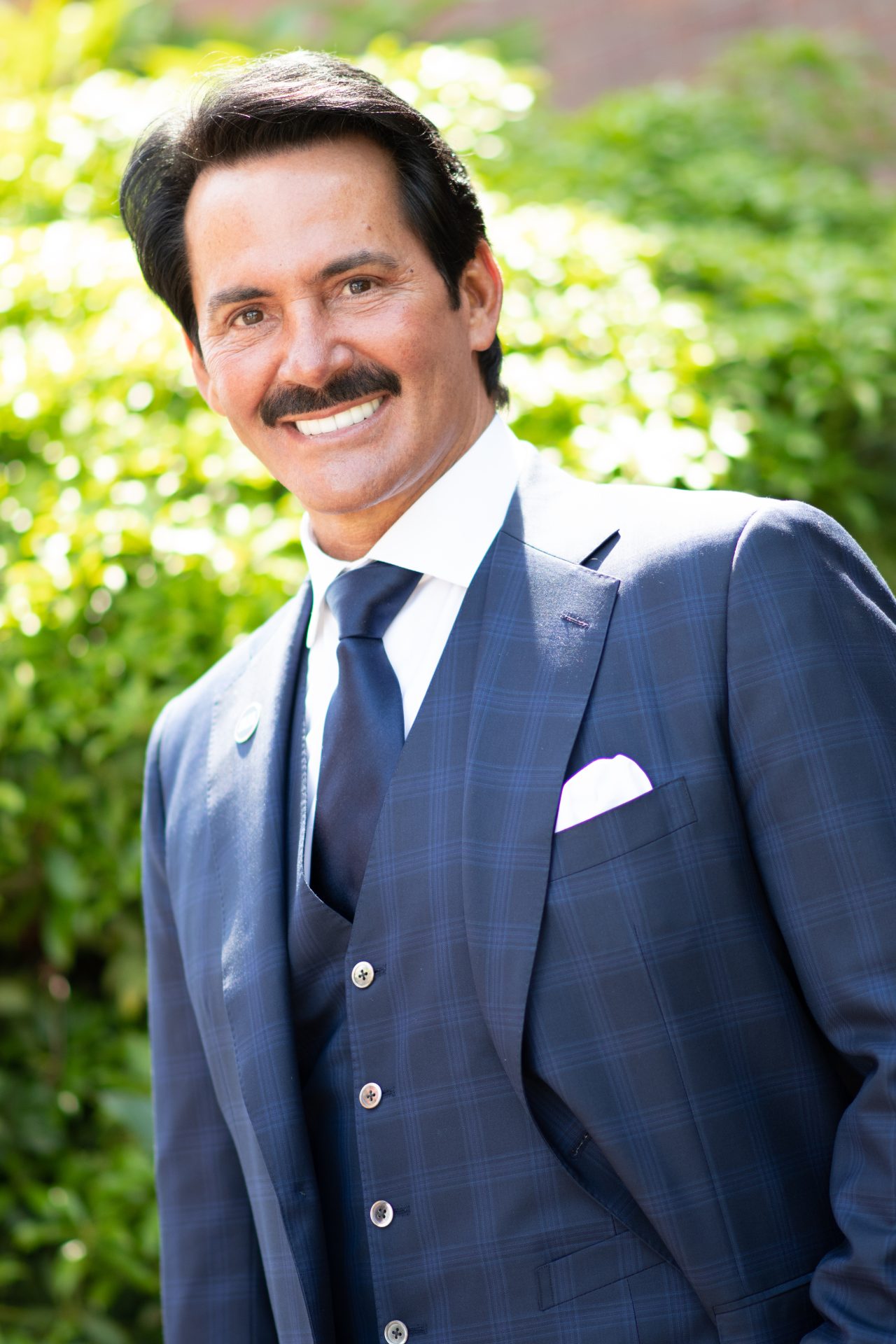 “I’ve always been a fierce competitor. This is an absolute necessity for managing money in this constantly changing economy.”

Ron Sloy is a Certified Financial Planner (CFP®) and co-founder of Sloy, Dahl & Holst, Inc. Ron’s ever-expanding practice has brought him to the attention of both local media and national publications including Forbes, Fortune, Bloomberg, Money Magazine, and landed him a slot as a contributor on the KOIN-TV program Keep It Local, offering concise market reviews and forecasting.

A lifelong athlete, Ron competed on national television in the pro-football halftime game Punt, Pass and Kick at age ten. He was a three-sport star athlete in high school, playing baseball, basketball and football. He made first-team all-state in baseball, and joined the Sigma Chi first-team All-American roster as the only freshman during his first year at University of Oregon.

“I get great pleasure when a Client shakes my hand to thank me. It reminds me when my Coach would congratulate me after a ball game for a job well done.”

Ron was drafted by both the St. Louis Cardinals and the Montreal Expos. Instead of pursuing the major leagues, he applied his competitive nature to his new passions: personal finance and wealth management. Ron began his career at Alexander Hamilton Life Insurance Company and later joined Interwest Financial Advisors before co-founding Sloy, Dahl & Holst, Inc. in 1986.

Ron also brings his competitive nature to the golf course. He is a scratch golfer, and has won numerous Northwest tournaments and dreams of one day giving the Senior PGA Tour a run. His passion for golf was the inspiration behind the Sloy, Dahl & Holst Annual Golf Invitational. Which has brought the likes of celebrity guests, Gary McCord, Rocco Mediate and Holly Sonders.

In 2017, Ron Sloy created and launched a Concentrated Equity private investment Fund.  The Fund’s objectives are to maximize shareholder return and wealth accumulation using an aggressive, highly-concentrated investment strategy focusing on growth.   The Fund’s investment strategy is based on the instinct, experience and conviction of Ron.  He is a trailblazing, highly competitive investment advisor who has been a student of, and a contributor to the financial markets for decades.

“I’m a strong advocate of a coordinated approach to wealth management. Working in tandem with accounting, insurance and legal advisors guarantees the best result in every situation.”

Jim Holst is a Certified Financial Planner (CFP®) and co-founder of Sloy, Dahl & Holst, Inc. Putting his analytical background to use, Jim has developed several of the computer models we rely on for asset allocation and money management. These models assist in structuring portfolios to successfully balance risk and rate of return.

Jim focuses his practice on asset management and comprehensive retirement planning. His extensive client base benefits from his decades of experience and an investment philosophy which incorporates thorough planning, careful review, and custom asset allocations geared to meet the unique needs of each client.

An active member of the American Association of Individual Investors and the Institute of Certified Financial Planners, Jim has been a featured speaker at financial planning seminars throughout the Portland metropolitan area.

When he’s not working, Jim enjoys taming his nearly half-acre property into a garden worthy of Sunset Magazine. He is also an avid beachcomber, spending hours with his children hunting for agates and special shells. Prior to co-founding Sloy, Dahl & Holst, Inc., Jim provided investment management services to a variety of profit-sharing plans, pension plans and trusts.

A co-founder of Sloy, Dahl & Holst, Inc., Tony Dahl was a Certified Financial Planner (CFP®). A good friend and loving husband, Tony was an avid runner, golfer and beach volleyball player with a passion for microbrews and the outdoors. In 1996, Tony lost his battle with cancer. He is honored every day as Sloy, Dahl & Holst, Inc. successfully continues the legacy he helped envision.

“Sloy, Dahl & Holst (SD&H) helps clients retire well. Whether through Qualified Plans or individual investors, we compete for our clients and constantly let them know how we compare to the relevant benchmarks. Too many advisors in this space set up programs that lack accountability, always allowing themselves the opportunity to point a finger at someone else. Our fees are fully disclosed, how we perform is always made black and white, and our clients understand whether or not working with SD&H has added value. It’s not the way most advisory firms like to work, but that’s who we are.”

Michael began his impressive career in the Qualified Plan industry while working for an independent TPA/Record Keeper, giving him invaluable insight which he would later leverage into the advisory side of the financial industry. His list of distinctions include Qualified Plan Financial Consultant (QPFC) through the American Society of Pension Professionals and Actuaries (ASPPA) and Accredited Investment Fiduciary Analyst (AIFA) through Fi360. Michael is a Series 65 licensed Investment Advisor Representative for SD&H.

Michael joined SD&H in November of 2008. He is credited with revamping SD&H’s Qualified Plan practice, which has led to a tremendous amount of growth over the last 10 years. He developed and implemented their one-on-one participant education program, in an effort to truly impact the financial health of all participants within Qualified Plans managed by SD&H. Michael was also the architect of SD&H’s Collective Investment Funds, established in 2016, which brought purchasing power and fee reductions seldom seen in the “Small Plan Market” to all of SD&H’s Plans and participants. He was named Chief Operating Officer in 2016, and currently oversees operations of both SD&H and Smart Investor (wholly owned subsidiary of SD&H).

Michael has a Bachelor of Arts degree in Economics, from the University of Washington. He has served on Charles Schwab’s National Trust and Custody Board, and is also a former board member of the ASPPA Benefits Council of the Great Northwest. Passionate about his community and child education, Michael served on the Investment Committee of Kindering; Washington state based nonprofit. Michael resides in Kirkland, Washington with his wife Brittany, and their daughters Sienna and Charlotte.

“Saving for retirement is one of the most important decisions one will ever make. I learned this lesson at a young age and knew I wanted to help others do the same.”

Paul has focused his career on the Qualified Plan industry.  In his current role as Sloy, Dahl & Holst’s Director of Retirement Plan Services, he works directly with plan participants to help them achieve financial freedom.  He knows that it is crucial for individuals to invest properly and he finds great satisfaction in helping others achieve their financial goals.  Sloy, Dahl & Holst prides itself on excellent client service, and Paul is committed to making sure that every Qualified Plan managed by Sloy, Dahl & Holst receives the highest standard of care.

Paul earned his BA in Economics from the University of Wisconsin – Green Bay and his MBA from Ashford University.  Born and raised in the Upper Peninsula region of Michigan, Paul has enjoyed all manner of outdoor activities from a young age. He is an avid golfer. When he is not on the course, he enjoys spending his free time backpacking and exploring everything the Northwest has to offer. Shortly after completing his collegiate career, his love for the outdoors brought him to Portland, Oregon; where he lives with his wife Alison and their pup, Mya.

“Solving problems is a significant part of my job. Whether it’s transferring assets, executing a trade or managing a client request, there is always something to keep me on my toes.”

With more than twenty-five years in financial services, Christine Cruz pairs a sophisticated level of industry experience with a gift for client communication, negotiation and trouble-shooting. Our clients and our team members rely on her expertise and attention to detail. Christine is a Series 65 licensed Investment Advisor Representative for SD&H and is currently pursuing her CFP ®.

When she is not busy generating quarterly reports, trouble-shooting compliance issues or researching on Morningstar, Christine can be found playing the piano at a local parish or with one of Portland’s best salsa bands.

“I believe it’s the personal touch we offer our clients which sets us apart.”

Celeste Lucas joined our team as an assistant to Ron Sloy. Her initial duties included premier customer service, client trading, and client reporting. Over the years, Celeste has accumulated vast experience in the financial industry, and accordingly, her duties have expanded to all aspects of managing Ron’s practice.

In 1998, Celeste met her husband Michael in the elevator of our office building. Their short trip made a strong impression and they were married three years later.

“The best part about facilitating our events is watching clients and friends come together to have fun.”

Shantel Sloy brings more than twenty years of customer service and marketing experience to her position. She joined our team in 2003 to strategically plan and execute all events for Sloy, Dahl and Holst. Our crown event is the Sloy, Dahl & Holst Annual Golf Invitational. Shantel understands the ins and outs of marketing strategy, analysis, campaign execution and staff management — all while keeping tight control over the bottom line.

In her free time, Shantel enjoys spending time with her family & friends, experimenting with new recipes including publishing her own cookbook, entertaining, traveling and photography.

“I’m proud to become a member of a team that places such a high importance on responsiveness and client service. Sloy, Dahl & Holst ultimately provides investment advice and financial planning services, but it all starts with how much we care for our clients and I’m proud to support that cause.”

Molly joined the SD&H team as an Executive Assistant, dedicated to enhancing the overall quality of our platform. Her primary duties include the organization and ongoing development of some of the systems/resources that make our program run. This can range from our internal library of documents and resources, to our client relationship management system and so on.

Molly spends most of her free time with her wife and family as well as her dog Bodie. She enjoys hiking the Oregon and Washington trails and looks forward to traveling out of state/country as often as possible. She loves art, sports and fulfilling her creative passions with home renovation and design projects.

“The importance of saving for retirement is something that was taught to me at a young age. At Sloy, Dahl & Holst, I get to return that favor and help others save for retirement.”

Bethany’s career in the Retirement Plan Industry began at the age of 15, where she began interning for a large record-keeping firm. Over the past 12 years, Bethany has spent most of her time working for that same firm in various roles. In her current role as Sloy, Dahl & Holst’s Participant Education Specialist, Bethany gets to do what she loves most: teach and help others achieve financial freedom.

Bethany earned her BA in Political Science at the College of Saint Benedict. Raised in the Pacific Northwest, Bethany loves everything outdoors. In her free time, you can find her playing soccer, hiking, running or spending time with her family and friends.

“It is the ultimate luxury to combine passion and contribution, coincidentally it also paves a very clear path to happiness.”

Jamie is a seasoned Executive Assistant, bringing decades of experience supporting prestigious clientele throughout the US, Europe, Caribbean and South America. Logistics, problem solving and project management are amongst her many talents. She has a true passion for going the extra mile to ensure and increase executives’ effectiveness.

Jamie was raised in South Florida and has recently re-located to Seattle to join the Sloy, Dahl & Holst family. She and her son enjoy outdoor exploration in their spare time. Jamie’s artistic nature inspires her to experience the many art galleries, museums, and abundant talent that the Pacific Northwest has to offer.

The information on this website does not constitute investment advice. Past performance is never a guarantee of future results. Please contact your financial advisor and review the applicable prospectus for each and every investment you are considering before buying or selling anything.